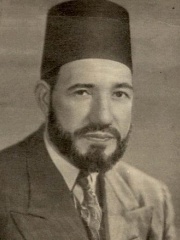 Sheikh Hassan Ahmed Abdel Rahman Muhammed al-Banna (Arabic: حسن أحمد عبد الرحمن محمد البنا‎; 14 October 1906 – 12 February 1949), known as Hassan al-Banna (Arabic: حسن البنا‎), was an Egyptian schoolteacher and imam, best known for founding the Muslim Brotherhood, one of the largest and most influential Islamic revivalist organizations.Al-Banna's writings marked a watershed in Islamic intellectual history by presenting a modern ideology based on Islam. Al-Banna considered Islam to be a comprehensive system of life, with the Quran as the only acceptable constitution. He called for Islamization of the state, the economy, and society. Read more on Wikipedia

Since 2007, the English Wikipedia page of Hassan al-Banna has received more than 536,761 page views. His biography is available in 44 different languages on Wikipedia making him the 47th most popular social activist.

Among SOCIAL ACTIVISTS In Egypt