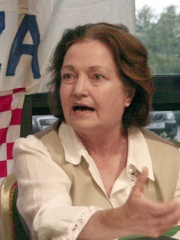 Mairead Maguire (born 27 January 1944), also known as Mairead Corrigan Maguire and formerly as Mairéad Corrigan, is a peace activist from Northern Ireland. She co-founded, with Betty Williams and Ciaran McKeown, the Women for Peace, which later became the Community for Peace People, an organization dedicated to encouraging a peaceful resolution of the Troubles in Northern Ireland. Maguire and Williams were awarded the 1976 Nobel Peace Prize.Since 2008 she has criticised the Israeli government's policy towards Gaza, in particular to the naval blockade. Read more on Wikipedia