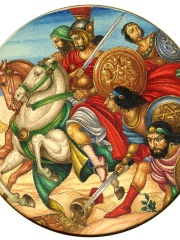 Simon ben Kosevah, or Cosibah, known to posterity as Bar Kokhba (Hebrew: שמעון בן כוכבה‎; died 135 CE), was a Jewish military leader who led the Bar Kokhba revolt against the Roman Empire in 132 CE. The revolt established a three-year-long independent Jewish state in which Bar Kokhba ruled as nasi ("prince"). Some of the rabbinic scholars in his time imagined him to be the long-expected Messiah. Read more on Wikipedia

Since 2007, the English Wikipedia page of Simon bar Kokhba has received more than 481,968 page views. His biography is available in 39 different languages on Wikipedia (up from 37 in 2019). Simon bar Kokhba is the 30th most popular social activist (down from 29th in 2019).