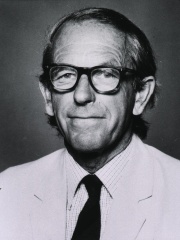 Frederick Sanger (; 13 August 1918 – 19 November 2013) was a British biochemist who twice won the Nobel Prize in Chemistry, one of only two people to have done so in the same category (the other is John Bardeen in physics), the fourth person overall with two Nobel Prizes, and the third person overall with two Nobel Prizes in the sciences. In 1958, he was awarded a Nobel Prize in Chemistry "for his work on the structure of proteins, especially that of insulin". In 1980, Walter Gilbert and Sanger shared half of the chemistry prize "for their contributions concerning the determination of base sequences in nucleic acids". Read more on Wikipedia

Frederick Sanger is most famous for his work in the field of biochemistry. He is credited with the discovery of the structure of insulin, which led to the development of a treatment for diabetes.

Among CHEMISTS In United Kingdom