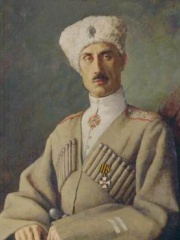 Baron Pyotr Nikolayevich Wrangel (Russian: Пётр Никола́евич барон Вра́нгель, romanized: Pëtr Nikoláevič Vrángel', German: Freiherr Peter Nikolaus von Wrangel; August 27 [O.S. August 15] 1878 – April 25, 1928), also known by his nickname the Black Baron, was a Russian officer of Baltic German origin in the Imperial Russian Army. During the later stages of the Russian Civil War, he was commanding general of the anti-Bolshevik White Army in Southern Russia. After his side lost the civil war in 1920, he left Russia. Read more on Wikipedia

Pyotr Wrangel is most famous for being a Russian general who led the White Army during the Russian Civil War.

Among noblemen, Pyotr Wrangel ranks 108 out of 842. Before him are Joan of France, Duchess of Berry, Gian Galeazzo Sforza, Joanna I of Naples, Prince Andrew, Duke of York, Queen Fabiola of Belgium, and Hugh the Great. After him are Cleopatra of Macedon, Élisabeth of France, Albert, Duke of Prussia, Princess Margaret of Connaught, Grand Duchess Olga Alexandrovna of Russia, and Giovanni di Bicci de' Medici.

Among NOBLEMEN In Lithuania

Among noblemen born in Lithuania, Pyotr Wrangel ranks 1. After him are Sophia of Lithuania (1371).