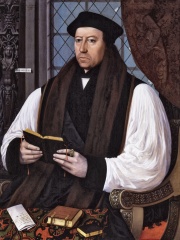 Thomas Cranmer (2 July 1489 – 21 March 1556) was a leader of the English Reformation and Archbishop of Canterbury during the reigns of Henry VIII, Edward VI and, for a short time, Mary I. He helped build the case for the annulment of Henry's marriage to Catherine of Aragon, which was one of the causes of the separation of the English Church from union with the Holy See. Along with Thomas Cromwell, he supported the principle of royal supremacy, in which the king was considered sovereign over the Church within his realm. During Cranmer's tenure as Archbishop of Canterbury, he was responsible for establishing the first doctrinal and liturgical structures of the reformed Church of England. Read more on Wikipedia

Thomas Cranmer was the Archbishop of Canterbury during the reign of Henry VIII. He was a leading reformer in the Anglican Church and is most famous for writing the Book of Common Prayer, which was published in 1549.

Among people born in 1489, Thomas Cranmer ranks 5. Before him are Thomas Müntzer, Antonio da Correggio, Margaret Tudor, and Charles, Duke of Vendôme. After him are William Farel, Antoine, Duke of Lorraine, Gaston of Foix, Duke of Nemours, Charles IV, Duke of Alençon, Gerónimo de Aguilar, Fernando d'Ávalos, and Henry V, Duke of Brunswick-Lüneburg. Among people deceased in 1556, Thomas Cranmer ranks 6. Before him are Ignatius of Loyola, Fuzûlî, Pietro Aretino, Humayun, and Lorenzo Lotto. After him are Frederick II, Elector Palatine, Martin Agricola, Maximus the Greek, Saitō Dōsan, Francesco Venier, and Richard Chancellor.