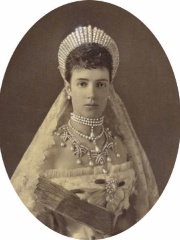 Maria Feodorovna (Russian: Мария Фёдоровна, romanized: Mariya Fyodorovna; 26 November 1847 – 13 October 1928), known before her marriage as Princess Dagmar of Denmark, was Empress of Russia from 1881 to 1894 as the wife of Emperor Alexander III. She was the second daughter of Christian IX of Denmark and Louise of Hesse-Kassel. Maria's eldest son became the last Russian monarch, Emperor Nicholas II. Read more on Wikipedia

Maria Feodorovna was the wife of Tsar Alexander II and the mother of Tsar Alexander III. She was a member of the German House of Holstein-Gottorp-Romanov and she was born in Germany. She became Empress of Russia after her husband was assassinated in 1881.

Among companions, Maria Feodorovna ranks 63 out of 673. Before her are Sita, Zayd ibn Harithah, Claude of France, Isabella of Portugal, Tiye, and Margaret Tudor. After her are Antinous, Poppaea Sabina, Sophie, Duchess of Hohenberg, Elisabeth Christine of Brunswick-Wolfenbüttel, Sepp Dietrich, and Elisabeth of Austria, Queen of France.