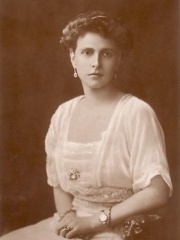 Princess Alice of Battenberg (Victoria Alice Elizabeth Julia Marie; 25 February 1885 – 5 December 1969) was the mother of Prince Philip, Duke of Edinburgh, mother-in-law of Queen Elizabeth II, and the paternal grandmother of King Charles III. After marrying Prince Andrew of Greece and Denmark in 1903, she adopted the style of her husband, becoming Princess Andrew of Greece and Denmark. A great-granddaughter of Queen Victoria, Alice was born in Windsor Castle and grew up in the United Kingdom, Germany and Malta. A Hessian princess by birth, she was a member of the Battenberg family, a morganatic branch of the House of Hesse-Darmstadt. Read more on Wikipedia

Princess Alice of Battenberg was a member of the British royal family who married Prince Andrew of Greece and Denmark. She was the mother of Prince Philip, Duke of Edinburgh, the husband of Queen Elizabeth II.

Page views of Princess Alice of Battenbergs by language

Among noblemen, Princess Alice of Battenberg ranks 72 out of 842. Before her are Afonso de Albuquerque, Princess Märtha of Sweden, Albert II, Prince of Monaco, Philip the Bold, Prince Gustaf Adolf, Duke of Västerbotten, and Maria Alexandrovna. After her are Francesco I de' Medici, Grand Duke of Tuscany, Dmitry Donskoy, Henri, Grand Duke of Luxembourg, Maria Josepha of Saxony, Dauphine of France, Pepin of Landen, and Sigurd Snake-in-the-Eye.