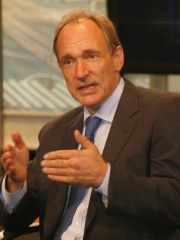 Sir Timothy John Berners-Lee (born 8 June 1955), also known as TimBL, is an English computer scientist best known as the inventor of the World Wide Web. He is a Professorial Fellow of Computer Science at the University of Oxford and a professor at the Massachusetts Institute of Technology (MIT). Berners-Lee proposed an information management system on 12 March 1989, then implemented the first successful communication between a Hypertext Transfer Protocol (HTTP) client and server via the Internet in mid-November.Berners-Lee is the director of the World Wide Web Consortium (W3C), which oversees the continued development of the Web. Read more on Wikipedia

Among COMPUTER SCIENTISTS In United Kingdom