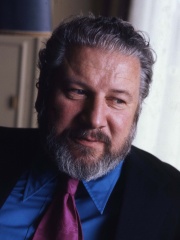 Sir Peter Alexander von Ustinov (; 16 April 1921 – 28 March 2004) was a British actor, filmmaker and writer. He was a fixture on television talk shows and lecture circuits for much of his career. Read more on Wikipedia

Peter Ustinov is most famous for his work as a writer, actor, director, and satirist.

Among people born in 1921, Peter Ustinov ranks 13. Before him are Astor Piazzolla, Suharto, Fawzia Fuad of Egypt, Michael I of Romania, Fahd of Saudi Arabia, and Yves Montand. After him are Joseph Beuys, Jean-Bédel Bokassa, Hua Guofeng, Sophie Scholl, Simone Signoret, and Giulietta Masina. Among people deceased in 2004, Peter Ustinov ranks 9. Before him are Yasser Arafat, Jacques Derrida, Ray Charles, Juliana of the Netherlands, Francis Crick, and Henri Cartier-Bresson. After him are Elisabeth Kübler-Ross, Czesław Miłosz, Princess Alice, Duchess of Gloucester, Françoise Sagan, Janet Leigh, and Christopher Reeve.