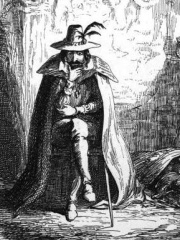 Guy Fawkes (; 13 April 1570 – 31 January 1606), also known as Guido Fawkes while fighting for the Spanish, was a member of a group of provincial English Catholics who was involved in the failed Gunpowder Plot of 1605. He was born and educated in York; his father died when Fawkes was eight years old, after which his mother married a recusant Catholic. Fawkes converted to Catholicism and left for mainland Europe, where he fought for Catholic Spain in the Eighty Years' War against Protestant Dutch reformers in the Low Countries. Read more on Wikipedia

Since 2007, the English Wikipedia page of Guy Fawkes has received more than 13,076,222 page views. His biography is available in 67 different languages on Wikipedia (up from 65 in 2019). Guy Fawkes is the 12th most popular social activist (down from 11th in 2019), the 70th most popular biography from United Kingdom and the most popular British Social Activist.

Guy Fawkes was a Catholic who wanted to assassinate King James I of England and replace him with a Catholic monarch. He planned to blow up the House of Lords during the State Opening of Parliament on November 5, 1605. He was caught in the act and tortured.