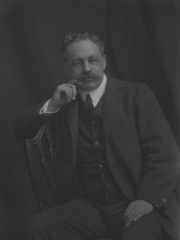 Sir Halford John Mackinder (15 February 1861 – 6 March 1947) was an English geographer, academic and politician, who is regarded as one of the founding fathers of both geopolitics and geostrategy. He was the first Principal of University Extension College, Reading (which became the University of Reading) from 1892 to 1903, and Director of the London School of Economics from 1903 to 1908. While continuing his academic career part-time, he was also the Member of Parliament for Glasgow Camlachie from 1910 to 1922. Read more on Wikipedia

Halford Mackinder was a geographer who is most famous for his theory of the Heartland. He believed that the most important geopolitical region in the world was the Heartland, which is the center of Eurasia.

Among politicians, Halford Mackinder ranks 1,278 out of 15,577. Before him are Jovian, Ludwig III of Bavaria, Peter of Castile, As-Saffah, Emperor Wu of Jin, and Herod Agrippa. After him are Fredrik Bajer, Henry the Lion, Æthelred the Unready, Totila, Georgy Lvov, and Paul Bocuse.