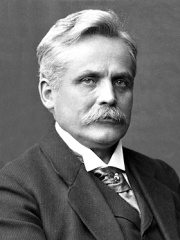 Wilhelm Carl Werner Otto Fritz Franz Wien (German pronunciation: [ˈvɪlhɛlm ˈviːn] (listen); 13 January 1864 – 30 August 1928) was a German physicist who, in 1893, used theories about heat and electromagnetism to deduce Wien's displacement law, which calculates the emission of a blackbody at any temperature from the emission at any one reference temperature. He also formulated an expression for the black-body radiation, which is correct in the photon-gas limit. His arguments were based on the notion of adiabatic invariance, and were instrumental for the formulation of quantum mechanics. Read more on Wikipedia

Since 2007, the English Wikipedia page of Wilhelm Wien has received more than 249,843 page views. His biography is available in 81 different languages on Wikipedia (up from 80 in 2019). Wilhelm Wien is the 51st most popular physicist (up from 53rd in 2019), the 84th most popular biography from Russia (down from 81st in 2019) and the 3rd most popular Russian Physicist.

Wilhelm Wien is most famous for his law, which says that the wavelength of a blackbody radiation is inversely proportional to its temperature.

Among PHYSICISTS In Russia