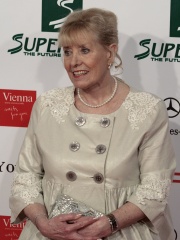 Elizabeth Williams (née Smyth; 22 May 1943 – 17 March 2020) was a peace activist from Northern Ireland. She was a co-recipient with Mairead Corrigan of the Nobel Peace Prize in 1976 for her work as a cofounder of Community of Peace People, an organisation dedicated to promoting a peaceful resolution to the Troubles in Northern Ireland. Williams headed the Global Children's Foundation and was the President of the World Centre of Compassion for Children International. She was also the Chair of Institute for Asian Democracy in Washington D.C. Read more on Wikipedia

Since 2007, the English Wikipedia page of Betty Williams has received more than 13,883 page views. Her biography is available in 56 different languages on Wikipedia making her the 97th most popular social activist.