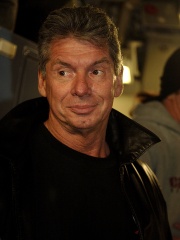 Vincent Kennedy McMahon (; born August 24, 1945) is an American professional wrestling promoter and executive, American football executive, and media proprietor currently serving as the chairman and CEO of WWE, and the founder and owner of Alpha Entertainment.McMahon was born in Pinehurst, North Carolina, and graduated from East Carolina University with a degree in business in 1968. He worked for the WWE for his father as a commentator and he assumed control of the company in 1982; McMahon saw the commercial potential of monopolizing the industry, which previously operated as separate fiefdoms across the United States. This led to the development of the annual WrestleMania, which has since become the most successful professional wrestling event in history. Read more on Wikipedia

Since 2007, the English Wikipedia page of Vince McMahon has received more than 11,943,901 page views. His biography is available in 47 different languages on Wikipedia making him the 12th most popular businessperson.