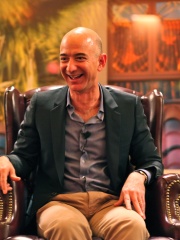 Jeffrey Preston Bezos ( BAY-zohss; né Jorgensen; born January 12, 1964) is an American entrepreneur, media proprietor, investor, computer engineer, and commercial astronaut. He is the founder, executive chairman and former president and CEO of Amazon. With a net worth of around US$159 billion as of August 2022, Bezos is the second-wealthiest person in the world and was the wealthiest from 2017 to 2021 according to both Bloomberg's Billionaires Index and Forbes.Born in Albuquerque and raised in Houston and Miami, Bezos graduated from Princeton University in 1986. Read more on Wikipedia

Jeff Bezos is most famous for being the founder and CEO of Amazon.com, the largest online retailer in the world.