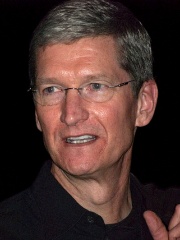 Timothy Donald Cook (born November 1, 1960) is an American business executive, philanthropist and engineer. Cook is the chief executive officer of Apple Inc., and previously served as the company's chief operating officer under its cofounder Steve Jobs.Cook joined Apple in March 1998 as a senior vice president for worldwide operations, and then served as the executive vice president for worldwide sales and operations. He was made the chief executive on August 24, 2011, prior to Jobs' death in October of that year. Read more on Wikipedia

Since 2007, the English Wikipedia page of Tim Cook has received more than 7,138,378 page views. His biography is available in 53 different languages on Wikipedia making him the 29th most popular businessperson.