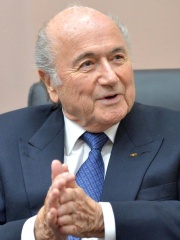 Joseph "Sepp" Blatter (born Josef Blatter; 10 March 1936) is a Swiss former football administrator who served as the eighth President of FIFA from 1998 to 2015. He has been banned from participating in FIFA activities since 2015 as a result of the FIFA corruption case made public that year, and will remain banned until 2027. From a background in business, public relations, and sports administration, Blatter became general secretary of FIFA in 1981 and was then elected president at the 51st FIFA Congress on 8 June 1998, succeeding João Havelange, who had headed the organization since 1974. Read more on Wikipedia

Sepp Blatter is most famous for being the president of FIFA, the international governing body of soccer.

Among BUSINESSPEOPLE In Switzerland