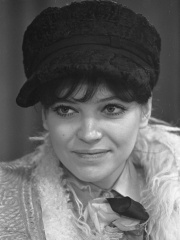 Anna Karina (born Hanne Karin Bayer; 22 September 1940 – 14 December 2019) was a Danish-French film avant garde actress, director, writer, and singer. She was French New Wave director Jean-Luc Godard's collaborator in the 1960s, performing in several of his films, including The Little Soldier, A Woman Is a Woman, My Life to Live, Bande à part (Band of Outsiders), Pierrot le Fou (Crazy Pete) and Alphaville. For her performance in A Woman Is a Woman, Karina won the Silver Bear Award for Best Actress at the Berlin Film Festival.In 1972, Karina set up a production company for her directorial debut, Vivre ensemble (1973), which screened in the Critics' Week lineup at the 26th Cannes Film Festival. Read more on Wikipedia

Anna Karina is most famous for being the muse of French New Wave director Jean-Luc Godard.