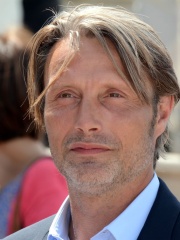 Mads Dittmann Mikkelsen, (Danish: [ˈmæs ˈmeɡl̩sn̩] (listen); born 22 November 1965) is a Danish actor. Originally a gymnast and dancer, he rose to fame in Denmark as an actor for his roles such as Tonny in the first two films of the Pusher film trilogy (1996, 2004), Detective Sergeant Allan Fischer in the television series Rejseholdet (2000–2004), Niels in Open Hearts (2002), Svend in The Green Butchers (2003), Ivan in Adam's Apples (2005) and Jacob Petersen in After the Wedding (2006). Mikkelsen achieved worldwide recognition for playing the main antagonist Le Chiffre in the twenty-first James Bond film, Casino Royale (2006). Read more on Wikipedia

Mads Mikkelsen is most famous for his role as Hannibal Lecter in the TV series Hannibal.