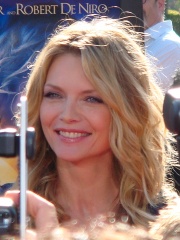 Michelle Marie Pfeiffer (; born April 29, 1958) is an American actress and producer. Known for her versatility, Pfeiffer's performances in a variety of film genres have consistently earned acclaim and several accolades, including a Golden Globe Award, three Academy Award nominations and an Emmy Award nomination. One of the most popular actresses of the 1980s and 1990s, Pfeiffer is considered to be among the most gifted actresses of her generation, and has remained one of Hollywood's most in-demand actresses for four decades. Read more on Wikipedia

Since 2007, the English Wikipedia page of Michelle Pfeiffer has received more than 12,630,249 page views. Her biography is available in 76 different languages on Wikipedia making her the 233rd most popular actor.