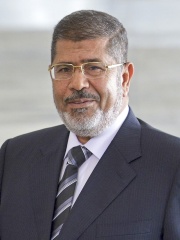 Mohamed Mohamed Morsi Eissa al-Ayyat (; Arabic: محمد محمد مرسي عيسى العياط IPA: [mæˈħæmmæd ˈmoɾsi ˈʕiːsæ (ʔe)l.ʕɑjˈjɑːtˤ]; 8 August 1951 – 17 June 2019) was an Egyptian politician and engineer who served as the fifth president of Egypt, from 30 June 2012 to 3 July 2013, when General Abdel Fattah el-Sisi removed him from office in a coup d'état after protests in June. An Islamist affiliated with the Muslim Brotherhood organisation, Morsi led the Freedom and Justice Party from 2011 to 2012. Morsi was born in El Adwah, Sharqia Governorate before studying metallurgical engineering at Cairo University and then materials science at the University of Southern California. Read more on Wikipedia

Mohamed Morsi was the president of Egypt from 2012 to 2013. He was the first democratically elected president in Egypt's history. He was overthrown in a military coup in 2013.

Among politicians, Mohamed Morsi ranks 1,425 out of 15,577. Before him are Emil Hácha, Francis II Rákóczi, Den, Isetnofret, Makarios III, and Henry I, Duke of Guise. After him are Leo von Caprivi, Henry II of Navarre, Antoine of Navarre, Louise Mountbatten, Engelbert Dollfuss, and La Malinche.