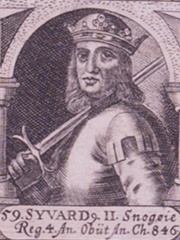 Sigurd Snake-in-the-eye (Old Norse: Sigurðr ormr í auga) or Sigurd Áslaugsson was a semi-legendary Viking warrior and Danish king active from the mid to late 9th century. According to multiple Saga sources and Scandinavian histories from the 12th century and later, he is one of the sons of the legendary Viking Ragnar Lodbrok and Áslaug. His historical prototype might have been the Danish King Sigfred who ruled briefly in the 870s. Read more on Wikipedia

Sigurd Snake-in-the-eye is most famous for killing the dragon Fafnir, who was guarding a hoard of treasure.

Among noblemen, Sigurd Snake-in-the-Eye ranks 55 out of 843. Before him are Marie Thérèse of France, Raynald of Châtillon, Henrietta of England, Robert Guiscard, Charles, Count of Valois, and Edward the Black Prince. After him are Arthur, Prince of Wales, Prince Gustaf Adolf, Duke of Västerbotten, Lady Jane Grey, Giuliano de' Medici, Grand Duke Michael Alexandrovich of Russia, and Olga of Kiev.

Among NOBLEMEN In Denmark