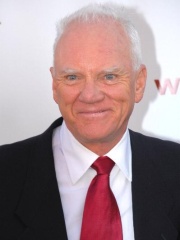 Malcolm McDowell (born Malcolm John Taylor; 13 June 1943) is an English actor, known for his boisterous and often villainous roles. Born in the Horsforth suburb of Leeds and raised in Liverpool, he later trained at the London Academy of Music and Dramatic Art before embarking on a career that has spanned over 50 years. McDowell is perhaps best known for the controversial roles of Alex DeLarge in Stanley Kubrick's A Clockwork Orange (1971), the title character in Caligula (1979), and Mick Travis in the trilogy of if.... Read more on Wikipedia

Since 2007, the English Wikipedia page of Malcolm McDowell has received more than 5,767,550 page views. His biography is available in 69 different languages on Wikipedia making him the 198th most popular actor.