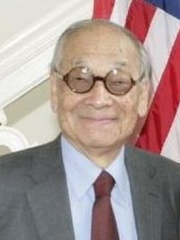 Ieoh Ming Pei ( yoh-ming-PAY; Chinese: 貝聿銘; April 26, 1917 – May 16, 2019) was a Chinese-American architect. Raised in Shanghai, Pei drew inspiration at an early age from the garden villas at Suzhou, the traditional retreat of the scholar-gentry to which his family belonged. In 1935, he moved to the United States and enrolled in the University of Pennsylvania's architecture school, but he quickly transferred to the Massachusetts Institute of Technology. Read more on Wikipedia

I. M. Pei is most famous for designing the Louvre Pyramid in Paris, France.

Page views of I. M. Peis by language

Among architects, I. M. Pei ranks 41 out of 424. Before him are André Le Nôtre, Suger, Hippodamus of Miletus, Ictinus, Jørn Utzon, and Vladimir Tatlin. After him are Callicrates, Giacomo Barozzi da Vignola, Rem Koolhaas, Christopher Wren, François Mansart, and Arne Jacobsen.

Among ARCHITECTS In China