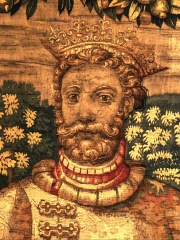 Abel Valdemarsen (1218 – 29 June 1252) was Duke of Schleswig from 1232 to 1252 and King of Denmark from 1250 until his death in 1252. He was the son of Valdemar II by his second wife, Berengaria of Portugal, and brother to Eric IV and Christopher I.As Duke of Schleswig, Abel came into conflict with his brother, King Eric IV, whose murder in 1250 he was suspected of orchestrating. Upon taking an oath to clear himself of the allegations, he was elected king. Read more on Wikipedia

Abel was the first son of Adam and Eve, and he was killed by his brother Cain.

Page views of Abel, King of Denmarks by language

Among politicians, Abel, King of Denmark ranks 1,472 out of 15,710. Before him are Cuauhtémoc, Francis I of the Two Sicilies, Georgy Lvov, John IV Laskaris, Ehud Barak, and Edmund I. After him are Archduchess Sophie of Austria, Emperor Xian of Han, Friedrich Fromm, John Sigismund Zápolya, Amon of Judah, and Ismail Ibn Sharif.

Among people born in 1218, Abel, King of Denmark ranks 2. Before him is Rudolf I of Germany. After him are Henry III, Margrave of Meissen, Emperor Chūkyō, Manuel I of Trebizond, Kujō Yoritsune, and Adelaide, Countess of Burgundy. Among people deceased in 1252, Abel, King of Denmark ranks 4. Before him are Giovanni da Pian del Carpine, Ferdinand III of Castile, and Blanche of Castile. After him are Sorghaghtani Beki, Peter of Verona, Rose of Viterbo, Isabella, Queen of Armenia, Otto I, Duke of Brunswick-Lüneburg, Sviatoslav III of Vladimir, Bohemond V of Antioch, and Zdislava Berka.