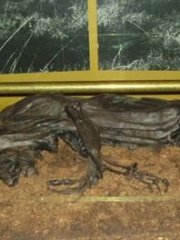 The Tollund Man is a naturally mummified corpse of a man who lived during the 4th century BC, during the period characterised in Scandinavia as the Pre-Roman Iron Age. He was found in 1950, preserved as a bog body, on the Jutland peninsula, in Denmark. The man's physical features were so well preserved that he was mistaken for a recent murder victim. Read more on Wikipedia

Since 2007, the English Wikipedia page of Tollund Man has received more than 1,323,984 page views. His biography is available in 38 different languages on Wikipedia. Tollund Man is the 470th most popular religious figure (up from 534th in 2019), the 56th most popular biography from Denmark (up from 61st in 2019) and the 2nd most popular Danish Religious Figure.

Tollund man is a bog body found in Denmark. He was discovered in 1950 and is believed to have lived in the 4th century BC. He is most famous for his well-preserved skin, which was found to be covered in tattoos.

Among religious figures, Tollund Man ranks 470 out of 2,272. Before him are Devadatta, Umm Salama, Saint Maurice, Thomas Becket, Bruno of Cologne, and Pope Marcellinus. After him are Pope Benedict VII, John Knox, Justin Martyr, Pope Anastasius II, Pope Agapetus I, and Saint Rosalia.

Among people born in 400 BC, Tollund Man ranks 1. After him are Bessus, Parmenion, Porus, Berossus, Theopompus, Thaïs, Leochares, Nectanebo II, Ephorus, Teos of Egypt, and Spitamenes.

Among RELIGIOUS FIGURES In Denmark