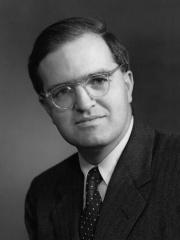 Aage Niels Bohr (Danish: [ˈɔːwə ˈne̝ls ˈpoɐ̯ˀ] (listen); 19 June 1922 – 8 September 2009) was a Danish nuclear physicist who shared the Nobel Prize in Physics in 1975 with Ben Mottelson and James Rainwater "for the discovery of the connection between collective motion and particle motion in atomic nuclei and the development of the theory of the structure of the atomic nucleus based on this connection". Starting from Rainwater's concept of an irregular-shaped liquid drop model of the nucleus, Bohr and Mottelson developed a detailed theory that was in close agreement with experiments. Read more on Wikipedia

Since 2007, the English Wikipedia page of Aage Bohr has received more than 355,098 page views. His biography is available in 65 different languages on Wikipedia making him the 74th most popular physicist.

Among PHYSICISTS In Denmark