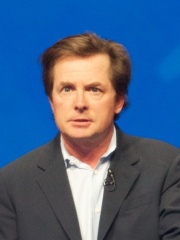 Michael Andrew Fox (born June 9, 1961), known professionally as Michael J. Fox, is a Canadian-American actor, comedian, author, film producer, and activist with a film and television career spanning from the 1970s. He starred in the Back to the Future trilogy in which he portrayed Marty McFly. On television, he played Alex P. Keaton on the American sitcom Family Ties (1982–1989) and Mike Flaherty on the ABC sitcom Spin City (1996–2000). Read more on Wikipedia

Since 2007, the English Wikipedia page of Michael J. Fox has received more than 15,962,009 page views. His biography is available in 78 different languages on Wikipedia making him the 243rd most popular actor.