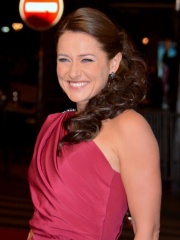 Sidse Babett Knudsen (Danish pronunciation: [ˈsisə ˈpæpet ˈkʰnusn̩]; born 22 November 1968) is a Danish actress who works in theatre, television, and film. Knudsen made her screen debut in the 1997 improvisational comedy Let's Get Lost, for which she received both the Robert and Bodil awards for Best Actress. Following the critical success of her debut, Knudsen has been considered one of the top Danish actresses of her generation. Read more on Wikipedia

Since 2007, the English Wikipedia page of Sidse Babett Knudsen has received more than 2,028,714 page views. Her biography is available in 29 different languages on Wikipedia making her the 2,715th most popular actor.