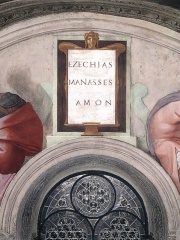 Manasseh (; Hebrew: מְנַשֶּׁה‎ Mənaššé, "Forgetter"; Akkadian: 𒈨𒈾𒋛𒄿 Menasî [me-na-si-i]; Greek: Μανασσῆς Manasses; Latin: Manasses) was the fourteenth king of the Kingdom of Judah. He was the oldest of the sons of Hezekiah and his mother Hephzibah (2 Kings 21:1). He became king at the age of 12 and reigned for 55 years (2 Kings 21:1; 2 Chronicles 33:1). Read more on Wikipedia

Manasseh of Judah is most famous for being a king of Judah. He was the son of Hezekiah and grandson of Ahaz. He reigned for 55 years and was a wicked king.

Page views of Manasseh of Judahs by language

Among politicians, Manasseh of Judah ranks 1,290 out of 15,710. Before him are Conrad IV of Germany, Numerian, Constantius III, Safiyya bint Huyayy, Charles Edward Stuart, and Ptolemy IX Lathyros. After him are Herod Archelaus, Philip V of Macedon, Charles III of Naples, Frederick IV of Denmark, Yang Shangkun, and Marwan II.

Others Deceased in 642 BC