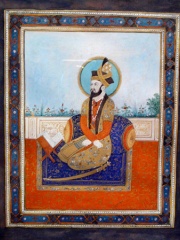 Nasir-ud-Din Muhammad (Persian: ناصرالدین محمد) (Persian pronunciation: [na'siːrʊdiːn mʊha'mad]; 6 March 1508 – 27 January 1556), better known by his regnal name, Humāyūn; (Persian pronunciation: [hʊma'juːn]), was the second emperor of the Mughal Empire, who ruled over territory in what is now Eastern Afghanistan, Pakistan, Northern India, and Bangladesh from 1530 to 1540 and again from 1555 to 1556. Like his father, Babur, he lost his empire early but regained it with the aid of the Safavid dynasty of Persia, with additional territory. Read more on Wikipedia

Humayun was a Mughal emperor who ruled from 1530 to 1556. He is most famous for his tomb in Delhi, which is the first garden-tomb on the Indian subcontinent.

Page views of Humayuns by language

Among politicians, Humayun ranks 1,688 out of 15,577. Before him are Li Xiannian, Béla I of Hungary, Senusret I, Achaemenes, Glycerius, and Emperor Suizei. After him are Clovis II, Francis, Duke of Guise, Ferdinand II of the Two Sicilies, Ehud Olmert, Prince Bernhard of Lippe-Biesterfeld, and Balian of Ibelin.