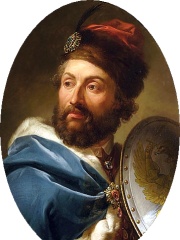 Casimir IV (in full Casimir IV Andrew Jagiellon; Polish: Kazimierz IV Andrzej Jagiellończyk [kaˈʑimjɛʂ jaɡʲɛˈl(l)ɔjntʂɨk] (listen); Lithuanian: Kazimieras Jogailaitis; 30 November 1427 – 7 June 1492) was Grand Duke of Lithuania from 1440 and King of Poland from 1447, until his death. He was one of the most active Polish-Lithuanian rulers, under whom Poland, by defeating the Teutonic Knights in the Thirteen Years' War recovered Pomerania, and the Jagiellonian dynasty became one of the leading royal houses in Europe. The great triumph of his reign was bringing Prussia under Polish rule. Read more on Wikipedia

Casimir IV Jagiellon is most famous for being the Grand Duke of Lithuania, and for his marriage to Elizabeth of Austria.

Among politicians, Casimir IV Jagiellon ranks 1,263 out of 15,710. Before him are Boris Johnson, Elizabeth of Luxembourg, Manuel II of Portugal, Den, Louis Philippe II, Duke of Orléans, and Sauli Niinistö. After him are Tongzhi Emperor, Ion Iliescu, Grand Duchess Anna Petrovna of Russia, David II of Scotland, Stateira II, and Alexios III Angelos.

Among people born in 1427, Casimir IV Jagiellon ranks 2. Before him is Emperor Yingzong of Ming. After him are Sigismund, Archduke of Austria, Lucrezia Tornabuoni, Antonio Rossellino, and Shen Zhou. Among people deceased in 1492, Casimir IV Jagiellon ranks 6. Before him are Lorenzo de' Medici, Piero della Francesca, Pope Innocent VIII, Elizabeth Woodville, and Jami. After him are Gülbahar Hatun, Antoine Busnois, Jaume Huguet, and Sonni Ali.