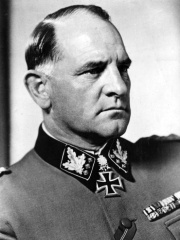 Josef "Sepp" Dietrich (28 May 1892 – 21 April 1966) was a German politician and SS commander during the Nazi era. He joined the Nazi Party in 1928 and was elected to the Reichstag of the Weimar Republic in 1930. Prior to 1929, Dietrich was Adolf Hitler's chauffeur and bodyguard. Despite having no formal staff officer training, Dietrich was, along with Paul Hausser, the highest-ranking officer in the Waffen-SS, the military branch of the SS. Reaching the rank of Oberst-Gruppenführer, he commanded units up to army level during World War II. As commanding officer of the 6th Panzer Army during the Battle of the Bulge, Dietrich bore responsibility for the Malmedy massacre, the murder of U.S. Read more on Wikipedia

Sepp Dietrich was a German SS-Oberstgruppenführer and Generalmajor of the Waffen-SS during World War II. He was a recipient of the Knight's Cross of the Iron Cross with Oak Leaves, Swords and Diamonds.

Among companions, Sepp Dietrich ranks 68 out of 673. Before him are Margaret Tudor, Maria Feodorovna, Antinous, Poppaea Sabina, Sophie, Duchess of Hohenberg, and Elisabeth Christine of Brunswick-Wolfenbüttel. After him are Elisabeth of Austria, Queen of France, Queen Sonja of Norway, Isabella of Aragon, Queen of Portugal, Blanche of Castile, Guinevere, and Abbas ibn Abd al-Muttalib.