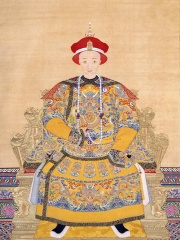 The Xianfeng Emperor (17 July 1831 – 22 August 1861), or by temple name Emperor Wenzong of Qing (清文宗), given name Yizhu (奕詝), was the eighth Emperor of the Qing dynasty, and the seventh Qing emperor to rule over China proper, reigned from 1850 to 1861. During his reign, the Qing dynasty experienced several wars and rebellions including the Taiping Rebellion, Nian Rebellion, and Second Opium War (Arrow War). He was the last Chinese emperor to have authoritarian and total executive ruling power. Read more on Wikipedia

The xianfeng emperor is most famous for being the emperor of China during the Taiping Rebellion.

Among politicians, Xianfeng Emperor ranks 1,156 out of 15,577. Before him are Frederick V of Denmark, Manasseh of Judah, Alexander I of Macedon, Dolores Ibárruri, Bashar al-Assad, and Casimir IV Jagiellon. After him are Amanullah Khan, Jean Monnet, Baldur von Schirach, Maximilian II of Bavaria, Roderic, and James A. Garfield.