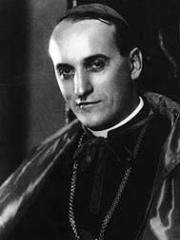 Aloysius Viktor Cardinal Stepinac (Croatian: Alojzije Viktor Stepinac, 8 May 1898 – 10 February 1960) was a senior-ranking Yugoslav Croat prelate of the Catholic Church. A cardinal, Stepinac served as Archbishop of Zagreb from 1937 until his death, a period which included the fascist rule of the Ustaše over the Axis puppet state the Independent State of Croatia (Croatian: Nezavisna Država Hrvatska or NDH) from 1941 to 1945 during World War II. He was tried by the communist Yugoslav government after the war and convicted of treason and collaboration with the Ustaše regime. The trial was depicted in the West as a typical communist "show trial", and was described by The New York Times as biased against the Archbishop (he didn't become a Cardinal until 1953). Read more on Wikipedia

Aloysius Stepinac was a Croatian archbishop who was tried for war crimes in Yugoslavia. He was found guilty and condemned to sixteen years in prison.

Among religious figures, Aloysius Stepinac ranks 658 out of 2,238. Before him are Hillel the Elder, Olaus Magnus, Piruz Nahavandi, Jean-Baptiste de La Salle, Zephaniah, and Theodora. After him are Mordecai, Eulalia of Mérida, James, brother of Jesus, Josaphat Kuntsevych, Angelo Sodano, and Saint Remigius.