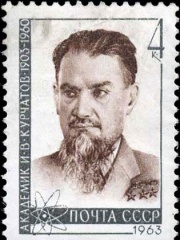 Igor Vasilyevich Kurchatov (Russian: Игорь Васильевич Курчатов; 12 January 1903 – 7 February 1960), was a Soviet physicist who played a central role in organizing and directing the former Soviet program of nuclear weapons.As many of his contemporaries in Russia, Kurchatov, initially educated as a naval architect, was an autodict in nuclear physics and was brought by Soviet establishment to accelerate the feasibility of the "super bomb". Aided by effective intelligence management by Soviet agencies on American Manhattan Project, Kurchatov oversaw the quick development and testing of the first Soviet nuclear weapon, which was roughly based on the first American device, at Semipalatinsk in Kazakhstan in 1949. Read more on Wikipedia

Igor Kurchatov is most famous for his work in the field of nuclear physics. He was part of the Soviet team that worked on the first atomic bomb.

Among PHYSICISTS In Russia