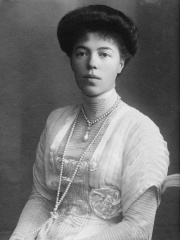 Grand Duchess Olga Alexandrovna of Russia (Russian: О́льга Алекса́ндровна; 13 June [O.S. 1 June] 1882 – 24 November 1960) was the youngest child of Tsar Alexander III of Russia and younger sister of Emperor Nicholas II. She was raised at the Gatchina Palace outside Saint Petersburg. Olga's relationship with her mother, Empress Marie, the daughter of King Christian IX of Denmark, was strained and distant from childhood. In contrast, she and her father were close. Read more on Wikipedia

Among noblemen, Grand Duchess Olga Alexandrovna of Russia ranks 111 out of 843. Before her are Roger I of Sicily, Maximilian I, Elector of Bavaria, Henri, Grand Duke of Luxembourg, Sophia of Hanover, Ramesses VI, and Joan of France, Duchess of Berry. After her are Albert II, Prince of Monaco, Albert, Duke of Prussia, Mariana of Austria, Fatma Sultan, Claude of France, and Michael Andreas Barclay de Tolly.