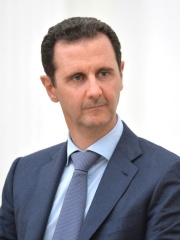 Bashar Hafez al-Assad (born 11 September 1965) is a Syrian politician who is the 19th president of Syria, since 17 July 2000. In addition, he is the commander-in-chief of the Syrian Armed Forces and the Secretary-General of the Central Command of the Arab Socialist Ba'ath Party. Read more on Wikipedia

Bashar al-Assad is most famous for being the president of Syria. He has been in power since 2000 and has been accused of using chemical weapons on his own people.

Among politicians, Bashar al-Assad ranks 919 out of 15,710. Before him are Rehoboam, Lysimachus, Galla Placidia, Ptolemy XII Auletes, Alfonso XII of Spain, and Vasili IV of Russia. After him are Haakon VII of Norway, Amenhotep I, Andrei Gromyko, Augustus III of Poland, Feodor III of Russia, and Lentulus Batiatus.