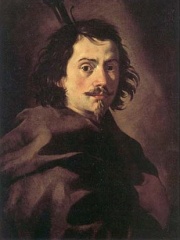 Francesco Borromini (, Italian: [franˈtʃesko borroˈmiːni]), byname of Francesco Castelli (Italian: [kaˈstɛlli]; 25 September 1599 – 2 August 1667), was an Italian architect born in the modern Swiss canton of Ticino who, with his contemporaries Gian Lorenzo Bernini and Pietro da Cortona, was a leading figure in the emergence of Roman Baroque architecture.A keen student of the architecture of Michelangelo and the ruins of Antiquity, Borromini developed an inventive and distinctive, if somewhat idiosyncratic, architecture employing manipulations of Classical architectural forms, geometrical rationales in his plans and symbolic meanings in his buildings. He seems to have had a sound understanding of structures, which perhaps Bernini and Cortona, who were principally trained in other areas of the visual arts, lacked. His soft lead drawings are particularly distinctive. Read more on Wikipedia

Francesco Borromini is most famous for his work in architecture. He designed the Church of San Carlo alle Quattro Fontane, which is considered to be a masterpiece.

Among ARCHITECTS In Switzerland