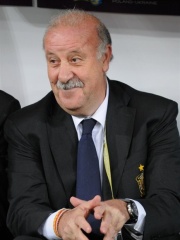 Vicente del Bosque González, 1st Marquess of Del Bosque (Spanish pronunciation: [biˈθente ðel ˈβoske ɣonˈθaleθ]; born 23 December 1950) is a Spanish football manager and former player who last managed the Spain national team. He is regarded as one of the greatest and most successful managers of all time; he is to date the only football manager to have won the Champions League, the European Championship, and the World Cup, as well as the Intercontinental Cup. After taking over from Luis Aragonés – who had led Spain to European success at UEFA Euro 2008 – del Bosque went on to lead the national team to win their first-ever FIFA World Cup in 2010, and then to retain their European Championship in 2012. Read more on Wikipedia

Vicente del Bosque is most famous for being the coach of the Spanish national football team, which won the World Cup in 2010.

Among COACHES In Spain