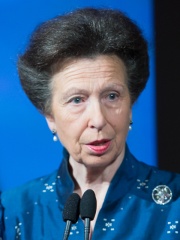 Anne, Princess Royal (Anne Elizabeth Alice Louise; born 15 August 1950), is the second child and only daughter of Queen Elizabeth II and Prince Philip, Duke of Edinburgh, and the only sister of King Charles III. Anne is 16th in the line of succession to the British throne and has been Princess Royal since 1987.Born at Clarence House, Anne was educated at Benenden School and began undertaking royal duties upon reaching adulthood. She became a respected equestrian, winning one gold medal in 1971 and two silver medals in 1975 at the European Eventing Championships. In 1976, she became the first member of the British royal family to compete in the Olympic Games. Read more on Wikipedia

Among noblemen, Anne, Princess Royal ranks 82 out of 842. Before her are Maria Josepha of Saxony, Dauphine of France, Pepin of Landen, Sigurd Snake-in-the-Eye, Princess Victoria of Saxe-Coburg-Saalfeld, Ramesses V, and Ramesses IV. After her are Lucien Bonaparte, Élisabeth Charlotte d'Orléans, Ramesses XI, Raymond III, Count of Tripoli, Ferdinando I de' Medici, Grand Duke of Tuscany, and Ismihan Sultan.