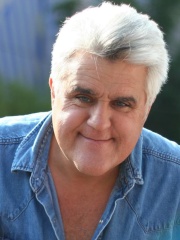 James Douglas Muir Leno (; born April 28, 1950) is an American television host, comedian, and writer. After doing stand-up comedy for years, he became the host of NBC's The Tonight Show with Jay Leno from 1992 to 2009. Beginning in September 2009, Leno started a primetime talk show, titled The Jay Leno Show, which aired weeknights at 10:00pm ET, also on NBC. Two months after it's debut, The Jay Leno Show was moved to the 11:35 timeslot due to poor ratings, pushing The Tonight Show with Conan O'Brien to 12:05am ET, causing O'Brien to leave two months later. Read more on Wikipedia

Since 2007, the English Wikipedia page of Jay Leno has received more than 6,856,851 page views. His biography is available in 59 different languages on Wikipedia (up from 55 in 2019). Jay Leno is the most popular presenter, the 276th most popular biography from United States (down from 259th in 2019) and the most popular American Presenter.

Jay Leno is most famous for hosting the Tonight Show with Jay Leno from 1992 to 2009.