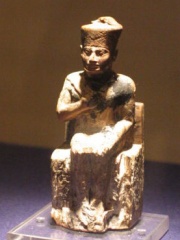 Khufu or Cheops was an ancient Egyptian monarch who was the second pharaoh of the Fourth Dynasty, in the first half of the Old Kingdom period (26th century BC). Khufu succeeded his father Sneferu as king. He is generally accepted as having commissioned the Great Pyramid of Giza, one of the Seven Wonders of the Ancient World, but many other aspects of his reign are poorly documented.The only completely preserved portrait of the king is a three-inch high ivory figurine found in a temple ruin of a later period at Abydos in 1903. Read more on Wikipedia

Khufu is most famous for being the pharaoh who commissioned the Great Pyramid of Giza.

Page views of Khufus by language

Among politicians, Khufu ranks 617 out of 15,577. Before him are Heydar Aliyev, Charles I of Anjou, Emperor Jimmu, Wilhelm, German Crown Prince, Chun Doo-hwan, and Charles the Simple. After him are Juliana of the Netherlands, Amenhotep I, Chandragupta Maurya, Catiline, Nurhaci, and Elena Ceaușescu.