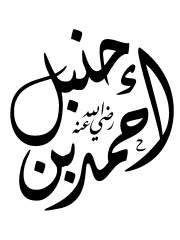 Aḥmad ibn Ḥanbal (أَحْمَد ابْن حَنۢبَل) or Ibn Ḥanbal (ابْن حَنۢبَل) ; 780–855 CE/164–241 AH, was an Iraqi Muslim jurist, theologian, ascetic, hadith traditionist, and founder of the Hanbali school of Sunni jurisprudence — one of the four major orthodox legal schools of Sunni Islam.A highly influential and active scholar during his lifetime, Ibn Hanbal went on to become "one of the most venerated" intellectual figures in Islamic history, who has had a "profound influence affecting almost every area of" the traditionalist (literalism-oriented) perspective within Sunni Islam. One of the foremost classical proponents of relying on scriptural sources as the basis for Sunni Islamic law and way of life, Ibn Hanbal compiled one of the most important Sunni hadith collections, the Musnad, which has continued to exercise considerable influence in the field of hadith studies up to the present time.Having studied fiqh and hadith under many teachers during his youth, Ibn Hanbal became famous in his later life for the crucial role he played in the Mihna, the inquisition instituted by the Abbasid Caliph al-Ma'mun towards the end of his reign, in which the ruler gave official state support to the Muʿtazilite dogma of the Quran being created, a view that contradicted the orthodox doctrine of the Quran being the eternal, uncreated Word of God. Read more on Wikipedia

Among WRITERS In Iraq