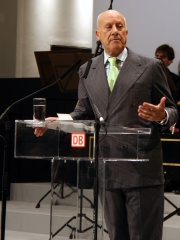 Norman Robert Foster, Baron Foster of Thames Bank, (born 1 June 1935) is a British architect and designer. Closely associated with the development of high-tech architecture, Foster is recognised as a key figure in British modernist architecture. His architectural practice Foster + Partners, first founded in 1967 as Foster Associates, is the largest in the United Kingdom, and maintains offices internationally. Read more on Wikipedia

Since 2007, the English Wikipedia page of Norman Foster, Baron Foster of Thames Bank has received more than 1,402,602 page views. His biography is available in 59 different languages on Wikipedia (up from 58 in 2019). Norman Foster, Baron Foster of Thames Bank is the 20th most popular architect (down from 16th in 2019), the 178th most popular biography from United Kingdom (down from 153rd in 2019) and the most popular British Architect.

Norman Foster is most famous for being a British architect. He has designed many buildings around the world, including the Reichstag in Berlin, the Hearst Tower in New York City, and the Millau Viaduct in France.

Among ARCHITECTS In United Kingdom