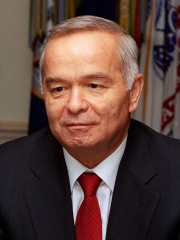 Islam Abduganiyevich Karimov (Uzbek: Islom Abdugʻaniyevich Karimov / Ислом Абдуғаниевич Каримов; Russian: Ислам Абдуганиевич Каримов; 30 January 1938 – 2 September 2016) was the leader of Uzbekistan and its predecessor state, the Uzbek Soviet Socialist Republic, from 1989 until his death in 2016. He was the last First Secretary of the Communist Party of Uzbekistan from 1989 to 1991, when the party was reconstituted as the People's Democratic Party of Uzbekistan (PDP); he led the PDP until 1996. He was the President of the Uzbek SSR from 24 March 1990 until he declared the independence of Uzbekistan on 1 September 1991.He declared Uzbekistan an independent nation on 31 August 1991. Read more on Wikipedia

Islam Karimov is most famous for being the president of Uzbekistan. He is also known for being a former Soviet politician and the first secretary of the Communist Party of Uzbekistan.

Among politicians, Islam Karimov ranks 934 out of 15,710. Before him are Nikephoros III Botaneiates, Alberto Fujimori, Ferdinand I of the Two Sicilies, Emperor Yao, Saud of Saudi Arabia, and Taejong of Joseon. After him are Wilhelm Pieck, Ruth, Otto IV, Holy Roman Emperor, Wenceslaus IV of Bohemia, Constantine V, and Rani of Jhansi.