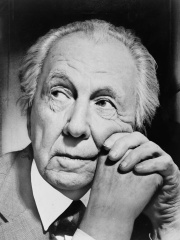 Frank Lloyd Wright (June 8, 1867 – April 9, 1959) was an American architect, interior designer, writer, and educator, whose creative period spanned more than 70 years, designing more than 1,000 structures, of which 532 were completed. Wright believed in designing structures that were in harmony with humanity and its environment, a philosophy he called organic architecture. This philosophy was best exemplified by Fallingwater (1935), which has been called "the best all-time work of American architecture." As a founder of organic architecture, Wright played a key role in the architectural movements of the twentieth century, influencing three generations of architects worldwide through his works.Wright was the pioneer of what came to be called the Prairie School movement of architecture, and he also developed the concept of the Usonian home in Broadacre City, his unique vision for urban planning in the United States. Read more on Wikipedia

Since 2007, the English Wikipedia page of Frank Lloyd Wright has received more than 5,856,243 page views. His biography is available in 141 different languages on Wikipedia making him the 13th most popular architect.