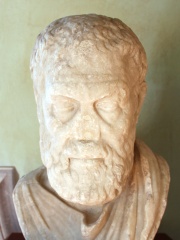 Hypereides or Hyperides (Greek: Ὑπερείδης, Hypereidēs; c. 390 – 322 BC; English pronunciation with the stress variably on the penultimate or antepenultimate syllable) was an Athenian logographer (speech writer). He was one of the ten Attic orators included in the "Alexandrian canon" compiled by Aristophanes of Byzantium and Aristarchus of Samothrace in the third century BC. He was a leader of the Athenian resistance to King Philip II of Macedon and Alexander the Great. Read more on Wikipedia

Hypereides was a Greek orator and politician who was famous for his speeches against Philip II of Macedon.

Page views of Hypereides by language

Among politicians, Hypereides ranks 4,102 out of 15,710. Before him are Moinuddin Chishti, Khalil Sultan, Jean Jacques Régis de Cambacérès, François Tombalbaye, Eumenes III, and Charles, Duke of Mayenne. After him are Ernest I, Duke of Saxe-Gotha, Francesco Maria I della Rovere, Duke of Urbino, Erwin Piscator, Teispes, Osroes I, and Marine Le Pen.

Among people born in 390 BC, Hypereides ranks 5. Before him are Lysippos, Shang Yang, Vyasa, and Lycurgus of Athens. After him are Alexander V of Macedon, Manius Curius Dentatus, Hieronymus of Cardia, Hakor, Peucestas, Tiberius Coruncanius, and Coenus. Among people deceased in 322 BC, Hypereides ranks 4. Before him are Diogenes, Demosthenes, and Heraclides Ponticus. After him are Leonnatus, Cleomenes of Naucratis, and Ariarathes I of Cappadocia.