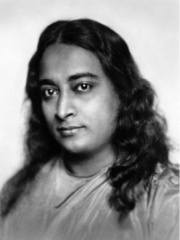 Paramahansa Yogananda (born Mukunda Lal Ghosh; January 5, 1893 – March 7, 1952) was an Indian Hindu monk, yogi and guru who introduced millions to the teachings of meditation and Kriya Yoga through his organization Self-Realization Fellowship (SRF) / Yogoda Satsanga Society (YSS) of India, and who lived his last 32 years in America. A chief disciple of the Bengali yoga guru Swami Sri Yukteswar Giri, he was sent by his lineage to spread the teachings of yoga to the West, to prove the unity between Eastern and Western religions and to preach a balance between Western material growth and Indian spirituality. His long-standing influence in the American yoga movement, and especially the yoga culture of Los Angeles, led him to be considered by yoga experts as the "Father of Yoga in the West."Yogananda was the first major Indian teacher to settle in America, and the first prominent Indian to be hosted in the White House (by President Calvin Coolidge in 1927); his early acclaim led to him being dubbed "the 20th century's first superstar guru," by the Los Angeles Times. Read more on Wikipedia

Paramahansa Yogananda is most famous for his book, Autobiography of a Yogi. This book is about his life and the yogic teachings that he learned.

Among philosophers, Paramahansa Yogananda ranks 305 out of 1,089. Before him are Jerome of Prague, J. L. Austin, Ram Mohan Roy, E. H. Carr, Alfred Schütz, and Roscellinus. After him are Nicolai Hartmann, Hilary Putnam, Theano, Andronicus of Rhodes, David Strauss, and Synesius.